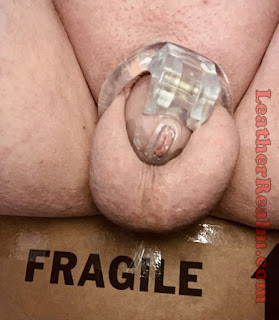 In sub jason's own words...

Another year has nearly passed. i have just arrived at MsPatty's, and have begun my typical couple of hours of waiting.  This time, i am confined in MsPatty's cage table - until She is ready to begin.  That will be sometime in the early evening.  MsPatty deliberately gives me this time to reflect on what has previously transpired, what may be on the plate for later on, and to write about what has been going through my mind.

It has occurred to me that this day and week of December contains two milestones. The first milestone is tied to 7 years ago, on New Year's Eve 2015. For me, it is the anniversary of my first in-person visit to MsPatty's space. More importantly, MsPatty identifies it as the first time Her boys between my thighs came home to Her. MsPatty also concluded, by the end of that meeting, that one day She would lead me to experience my fantasy of castration. Every year since, sans the first year, we have managed to have a meeting during this week between the Christmas and New Year's holidays. Each year, MsPatty celebrates the return of Her boys to Her hands. It has become a gift that - so far - keeps on giving (to Her).

The second milestone occurred 3 years ago, on December 26. 2019.  On that date, MsPatty modified her boys between my thighs to, as She puts it, serve only Her.  Using Her band on the Tri-bander, an acrylic press, and by injecting Her boys with Everclear within the space of an hour, She produced a life-changing moment in time.  This would significantly reduce my testosterone level to below normal over the next 8-12 hours, rendering me sexually dysfunctional by morning.  Unbeknownst at the time, my then ~40 years of being able to engage and enjoy heterosexual activities with other women would effectively and abruptly came to an end.  In an odd date coincidence, MsPatty's first response to my filling out Her Contact Form arrived in my email box just past midnight on December 26, 2015 - exactly 4 years earlier to the day.  i was also able to stop in this week on Monday, December 26th, to provide my sample for the most current T-test, which hopefully is available for MsPatty's review tonight.

Going back to events on December 26, 2019, MsPatty had then hinted that, along with the banding, and the acrylic press, She may have injected the CaCl in Everclear solution (a speculative lie - for it's mind-fucking effect).  It would have caused the greater damage of Her three injection possibilities.  After all of the activities from the visit concluded the next morning, i was already experiencing the initial effects of plummeting testosterone, including problems getting hard, and struggling to release when being forced to by her wand.  i made a brief comment to Her following that ordeal, not knowing, but possibly realizing somehow, that my castration fantasy experience was more real than fantasy.  i said (in context) that if this struggle was to be my sexual future, that i would prefer to suffer for Her in this reduced state vs having no libido at all.  These speculative words of clarity (in hindsight) have, in a way, become true at this point.

MsPatty says She doesn't recall hearing those words from me at the time.  She was still greatly aroused and buzzing from the intense and extended overnight activities.  From Her perspective it would not have mattered by that point.  She was certain that She had successfully taken away my libido for awhile with the banding, the goal She had decided on 4 years earlier, and as She had told me She would do, just over a month earlier.  By virtue of injecting Everclear (which only she knew about that at the time), She had already determined that i would have a long-term reminder, i.e. - She wanted to cause some permanent damage.  After a few months, She teased that a small hint of healing/recovery might show up.  This was noticed in my updates, but then further improvement quickly stalled.  By my summer 2020 visit, it was obvious that MsPatty had succeeded in both of her goals.  i had indeed experienced the effects of castration, and i would always have a reminder of the experience.  She sheds no tears at the significant and permanent effect She has had on my libido; for there remains no question now that She owns her boys between my thighs.

Each year, since that date 3 years ago, has been defined as Judgement Day by MsPatty.  In the month or so leading up to Judgement Day 2022, She has put together a series of polls, teasers, and history montages online.  In private, She has again been lubing up what i refer to as Her 'mind fuck' phallus, using it to drive all kinds of speculation into my mind as to what may be in store for this anniversary.  It of course stirs up the past Judgement Day events...

The first modification anniversary, 2020, it was Her offering a 'Russian Roulette' of three syringes - Saline, Everclear, or CaCl 50% solution in Everclear - and Her boys received a massive fluid injection from the syringe i chose.  By sheer chance, i chose the safest, which was saline.  i would only learn the results of my choice a few weeks later, for no significant change appeared in my (now much more limited) sexual capacity.  This visit's experience would actually draw some past connection to the 2 years of visits anniversary, where She injected each of Her boys with 2cc of Everclear, and my libido was quietly dimmed a fair amount for the next ~2.5 months.

The second modification anniversary, 2021, was a revisiting of the various castration resources MsPatty has at Her bright red fingertips.  MsPatty began with the Burdizzo, painfully compressing, but not fully crushing, one of my cords, before deciding against the method.  Next was the Tri-Bander, which MsPatty had identified back in July 2019 to be path She would use for my fantasy castration experience.  i was banded again, for 20 minutes, before She also decided against continuing with that.  Following those two possibilities, She teased to the camera/audience at what surgical removal would entail (blindfolded, i could not see it, only feel her sharp tools, and hear Her words), followed by the smelling of Everclear and a massive injection of liquid into one or both of Her boys between my thighs.  Due to my already damaged and fragile reproductive system, a few days later i would notice symptoms of a drop in my already low libido.  i would remain unsure if She had actually delivered Her coup de grace between my thighs until a few weeks later that She had switched syringes, and only injected saline.  The slightly lower testosterone numbers in a test a few months later, however, pointed to how little She might have to do down there in the future.

This year, i have continued to do my best to keep MsPatty updated with my frustrations, and the functional limitations i experience, involving my lack of libido.  Many times, She proudly responds with "Yes, i did that." and occasionally reports how often my words get her juiced to the point she must press her special buttons and climax over and over again.  Indirectly keeping Her wet, pleasured, and amused, with updates of my ongoing struggles, may be the key to being granted another year with Her boys between my thighs.  As long as i remain frustrated at the memories of what i can no longer achieve, disappointed knowing there are women i can no longer pursue, yet still experience daily physical reminders of what She did, and what used to reliably function, MsPatty may allow me to keep Her boys between my thighs for a while.  At the same time, i know MsPatty is still a very Strong Woman, and one that can, and without warning, change Her mind.

Through all of his, it is obvious to me that what is left of my libido is very weak and remains sensitive to even minor impacts.  MsPatty knows this, and it excites Her as much as it disappoints me.  She always seems to want more from Her boys.  As She manipulates my mind, i have come to accept that what is left of my sexual future resides fully under MsPatty's control.

For those that have been following this journey and have offered those delicate bits between Your thighs to MsPatty in comments but have yet to follow through:  If you think you live too far away, know that i have lived between 450-750mi from MsPatty's space over this time.  This translates into an 8-12hr drive, which i split up, and mix in visits to other people i know along the way.  This means that you have no excuse not to visit MsPatty.  To the best of my calculation, this is also my 35th visit, making for an average of 5 visits each year.  Even if you can only make it once or maybe twice, you should really make the effort today.  It is time start Your own unique journey with MsPatty.

Posted by Cruel Mistress at 5:26 PM