Posted by Cruel Mistress at 5:24 PM

Don't you just love a good build up?

The video is also posted on the video gallery below. 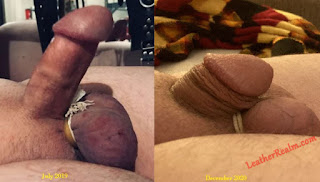 i arrived early this afternoon, the day after Christmas, much like one year ago. i am now shackled to MsPatty’s gallows.  my clothes have been taken away until Sunday morning.  MsPatty now desires my 12 month summary, with my thoughts on what She took away from me.

MsPatty had decided, one year ago, to allow me to retain Her testicles between my thighs for another year.  She didn’t promise me they would be functional, and that was to be Her lengthy reminder.  my libido, and my ability to sexually function as a male, was taken away.  As the famous idiom goes: The devil is in the details.

It is evident, by feel and functionality, that i am less than the ‘average male' i once was.  my equipment, or 'the package’, between my thighs, is smaller.  The related things that (no longer?) stand out:

- Diminished libido - the 'drive' i once had for sex is weak, yet some has returned in recent months.  It is not strong enough to generate an erection from good memories and fantasy as it once had.  Interest in sex after a release fades for several days after.  The T-tests tell the story of why.

- Reduced testicle volume.  After the initial swelling subsided, significant atrophy was noticed.  Testicle volume was researched.  my prior measurements were not available, so the calculated results are somewhat subjective.  Yet, even having approached the ‘normal’ size range, their ‘feel’ size in the scrotum is still noticeably smaller than it was.  Pictures also confirm the shrinkage.

- Diminished penis. my natural erect length was an average 6” or slightly more on a good day.  It has diminished ~1" or so depending on best effort.  There may also be a small loss in girth.  Becoming and staying erect is not possible without a ring and/or constant physical stimulation.

- Diminished ejaculate. my release ‘production’ is diminished for both quality and quantity.  my first release, after a week since last, is closer to what was typical before for a ‘round two’, i.e. - with reduced liquid quantity, and a few weaker spurts, before the dribbles. The ejaculate quality is sometimes more clear/liquid, implying less sperm in the mix, particularly when the time between releases is short.  A second round, when forced an hour or so later, is just a little dribbling.

- Reduced enjoyment.  The mental drive to climb to the summit, and post-orgasm euphoria, are less rewarding.  There is a frustrated effort needed to gain a firm erection.  Controlling a release at the peak's edge is difficult as backing off causes anxiety to remain hard.  Going over the edge, fewer and weaker spurts of semen trigger the psychological reminder of what MsPatty has taken away.

There were several opportunities to engage in sex with a woman this year.  MsPatty denied me of the ability to take part.  i have...low testosterone, erectile dysfunction, and a weak libido.  MsPatty disconnected the mental urge and my physical response to sexual arousal.  i still cannot perform sexually.

As this appointment with MsPatty approached, i began to review my notes and memories of this year.  The healing has slowed.  i am unlikely to regain full capacity.  MsPatty made my castration fantasy a reality this entire year, and it may never end.  It is frustrating to have sexual desire, but a limp and stubby penis. i can still hope for that to change.

It is almost time for MsPatty to return for the evening. She had indicated that She will not be gentile with Her testicles between my thighs tonight.  i know that they will need to suffer for Her pleasure if there is any chance of me keeping them for another year.

An Afternoon with Fetishist J... 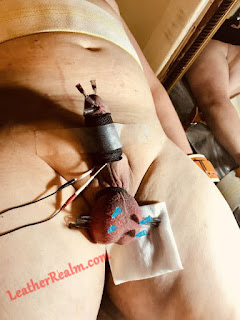 New beginnings are always such a thrill. Even though I have skewered many sets of balls, every time is so different from another. This past week, I amused Myself with Fetishist J, I restrained him to My medical table and began to allow him to experience not only testicle skewering but also needle insertion into the balls, insertion into the cock head as well as testicle infusion. Yes, his first time I injected 9ml into each testicle.
As I'm sure you can figure out, it had been so long since I skewered a set of balls that My panties was soaked even before I finished. <wicked giggle>
I'm in such a generous mood, I've added video below on My Medical Fetish video Gallery of the experience.
It's not too late to show your support of Leather Realm by sending an Amazon E-Gift Certificate to webmaster@LeatherRealm.com
Latest Update:
December 2020 - June 2021
Medical Fetish Video Gallery
Medical & Body Fetish Journal 2011 - 2018
Medical & Body Fetish Journal 2006 - 2010
LeatherRealm: Photo Gallery

On December 26th 2019 I injected Everclear into each of My testicles between sub jason's thighs, 30 minutes into an hour long banding.  I chose to allow him to keep My balls for another year but with a reminder that has lasted almost a year now.
Above, you can see how his testosterone has been affected by My choice and My not so subtle reminder. Soon, I will have his current results and will definitely post them.
Once again on December 26th 2020, I will be making My choice whether to allow him to keep My balls for another year or to take them. On Twitter, I am posting surveys, videos and pictures from the last year during this journey. Be a part of My decision this year, Share them and possibly be a part of this life changing event.
Latest Update:
December 2020
Medical Fetish Video Gallery
Medical & Body Fetish Journal 2011 - 2018
Medical & Body Fetish Journal 2006 - 2010
LeatherRealm: Photo Gallery

Posted by Cruel Mistress at 9:45 PM