sub jason, 24-Month Update, in his own words.

MsPatty has reminded me that another year has passed, and my lease on Her testicles between my thighs is again up for renewal.  As it was a year ago, public opinion is being sought out to influence Her decision and possibly define Her activities around that decision.  My current state of sexual function is another of the factors under consideration.

As it was well documented two years ago, MsPatty's devastated the internal function in each of Her testicles with a band and Everclear injections.  Volume measurements calculate to them being physically below average.  i have had low testosterone levels since i left her space the next morning, with the more recent quarterly Full-T tests confirming the effects.

A typical healthy male has the capacity to know average testosterone levels (~650ng/nl, within the normal range of 259-850) on only one good testicle.  In this case, both the regular and excess production capacity of both organs was taken away, and observable physical atrophy occurred.  Their reduced size hints at the extent of the damage, and it appears permanent.  At the slow rate i am still improving, my testosterone levels might reach the low/normal line (@ 40% of average) in another year.  That line is not a comfort to me.  It has been estimated my libido had been slightly above average before December 2019.

In the past several months, i have noticed that the low testosterone has probably caused many of my memories of past sexual activity to fade.  Only the highest intensity events are possible to recall, and the older memories don't register like they used to.  It is difficult to 'feel' the memory when one's loins are no longer flooded with the hormones which made them possible.

i have asked MsPatty, and She does not consider my current state to be castrated.  She says they still somewhat work.  At the same time, my testosterone levels are insufficient to produce and maintain a natural erection.  This erectile dysfunction means i cannot engage in penetrative sexual intercourse.  my recovery capacity for the next useful sexual emission remains several days.  The quality and quantity of my sexual fluid releases remains greatly diminished.  MsPatty's goal on 12/26/2019 was to leave a lingering reminder.  She has said Her expectations from those events have been greatly exceeded, and it does not bother her that i struggle sexually.  It actually thrills her that i continue to experience the symptoms and frustration of what She took away.

What MsPatty has effectively taken away is my ability to enjoy normal sexual relations with a woman - for the rest of my life.  MsPatty knows that having low testosterone (vs none) leaves open the possibility of additional improvement, albeit remote, at this point.  She also knows it reminds me every day that, for the first half of my adult life, Her testicles had made more than enough testosterone for me to pursue my primal urges.  As for the second half of my life, She has caused there to be only enough to remember what used to be.

The chance is slim, but i still hope for some more improvement, and i need Her testicles to do that.  If it means suffering for her, i desire to do so.

For Christmas this year, I gave him a little blue gift and permission to use My balls between his thighs once before he faces judgement day if he could locate a willing female to penetrate. As of today, he has yet to use My gift.

In less than 5 days, sub jason will face judgement day which is New Year's Eve. Will he walk out My door with permission to continue to use My balls between his thighs one more year or will I be taking them back which will render them useless?  <wicked grin>

Only one way to find out. 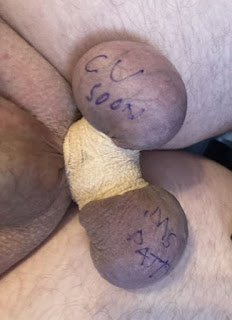 For the first month or so:
You may not physically feel any different, although the internal feeling that something is missing slowly creeps in.
5Mos: Generally true, but the first 2 weeks was masked mostly by organ swelling and regional pain.
24Mos: i continue to feel sexually inadequate between my thighs.
You will gradually lose your sex drive.
5Mos: i had little to none soon after until about 3+ months later. While some has returned, it's still currently low.
24Mos: The interest in a partner has settled.  my basic desire is for an orgasm once or twice a week by masturbation, which is all i am able to achieve.
Emotionally, you tend to want to masturbate more and more, while it is still possible.
5Mos: This was true, but i held myself to about twice a week for release measurement purposes. The urge to know if they were still working was the prominent interest.
24Mos: i edge constantly, but rarely get hard. i am biologically unable to produce enough fluid for an enjoyable release more than 1-2 times a week.
Past a few weeks to a month:
You will have random hot flashes and night sweats, and they may continue for weeks, months, or more.
5Mos: True, and they continued with slightly less intensity past 3 months, but rare now at 5 months.
24Mos: i am more sensitive to hard work and more excessive temps.  The struggle to regulate my body temperature/comfort zone is more noticeable.
Your penis will slowly shrink and atrophy.
5Mos: It lost ~20% of its former erect length, unknown girth loss (erect) in the initial weeks. It has regained about half of what length was lost.
24Mos: i have not regained any additional length.  Achieving sufficient firmness still takes effort.  Except for the brief period before a release, i am a stubby but semi-soft/thicker 3+".
Your penis will lose sensitivity, with physical contact becoming more like any other part of your skin.
5Mos: True. It has since regained some sensitivity after 3+ months, but not back to what it was.
24Mos: The sensitivity level is about the same as it was over a year ago.  It continues to affect my ability to become and stay hard and aroused.
As your testicles atrophy, you will lose most of the sexual feelings once centered in your groin region.
5Mos: It had produced a void feeling in the region soon after, for several weeks, which dissipated to neutral and a slight recovery after some hormone production rebounded near 3+ months.
24Mos: Much of my past evaluation was masked by the optimism that my libido was still returning.  my libido is very weak.  my loins feel neutral most of the time.
Your testicles will lose mass, and your scrotum will shrink.
5Mos: They lost ~50% in volume and have only recently regained a small of that amount back.
24Mos: The volume calculations at 24 months, and visual evaluation, indicate a testicle volume which has settled just below human male average.
Erections will become less firm, then weak, until they become impossible to achieve.
5Mos: Erections became difficult with physical stimulation, impossible to achieve by mental efforts, and only recently improved a little approaching 4-5 months.
24Mos: Erections remain an effort to achieve and require multiple sources of stimulation to gain and maintain.  i am otherwise limp all of the time.
M/F sexual dysphoria will be reduced.
Not an issue before, 5Mos, or at 24Mos.
M/Eunuch sexual dysphoria will be reduced.
Not an issue before, 5Mos, or at 24Mos.
You may experience more emotional episodes.
Not an issue before, 5Mos, or at 24Mos.
Longer Term: COVID isolation protocol has made some of this difficult to directly attribute.
You may lose upper body muscle and strength.
Some may have been lost at this point, with a note toward both age and COVID lifestyle contributing to reduced physical activity.
You will likely gain abdominal fat.
No change in weight @ 2+ months, but heavier at 5 months and more so toward 24 months due to world events (COVID) and reduced physical activity.
You will stop looking at women within a sexual context.
5Mos: This was true particularly during the 1–2-month period. Due to a lack of being able to sexually perform, there is reduced interest.
24Mos: The interest returned for a while, but the reality of my inability to perform naturally has been proven.  My desire to pursue someone, then reveal i am impotent, seems like a waste of effort.
Mustache and bear growth reduces dramatically.
Not seen yet.
Body hair softens, thins, or disappears.
Did not occur, although some slowing of baldness may have happened.
You will feel as if you are asexual.
Did not occur.
Female breasts may develop over a period of a couple of years.
Did not occur.
To view all My posts here on LeatherRealm talking about sub jason's journey, go to LeatherRealm: sub jason. 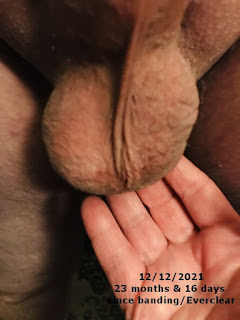 Current measurements of My testicles between sub jason's thighs. As you can see from the first measurements in March 2020, they have increased in size since the original measurements 3 months after being banded and injected with Everclear. This increase happened during the healed process.

On December 26th 2019 I injected Everclear into each of My testicles between sub jason's thighs, 30 minutes into an hour long banding.  I chose to allow him to keep My balls for another year but with a reminder.
Judgement day, December 26th, 2020 then came. One syringe was filled with saline which would allow him to keep My testicles for another year and one syringe filled with enough Everclear to render My testicles truly castrated. I allowed him a choice, a 50/50 choice. With his choice, he was allowed to keep them one more year.
Once again on December 31st 2021, I will be making My choice whether to allow him to keep My balls for another year or to take them. On Twitter, I am posting surveys, videos and pictures from the last 2 years during this journey.
Be a part of My decision. Share My posts on Twitter and possibly be a part of this life changing event.
To view all My posts here on LeatherRealm talking about sub jason's journey, go to LeatherRealm: sub jason.

Posted by Cruel Mistress at 3:55 PM