An Afternoon with sissy slut t... 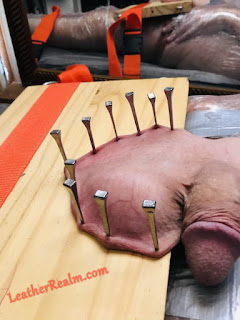 Sissy slut t came to bring Me pleasure and I knew exactly how I was going to enjoy him. After restraining him by wrapping him up in pallet wrap, I secured him to the cage table. Soon after I sat back, smoked a cigarette and ever so often placed the blazing hot cherry of it against his sensitive nipples. After putting out the cigarette, I began using a candle to coat his nipples and dripping hot wax over his groin. To change it up, I randomly shot ice cold water over his secured body till I had My fill. Finally, I placed My nailing board under his loose scrotum and secured it. With a smile, I began stretching out his scrotum and using horseshoe nails to secure the thinned out ball sack. One after the other, I began nailing each horseshoe nail with a hammer till I reached 10. 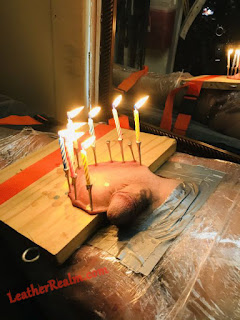 To celebrate reaching 10 nails, I attached birthday candles to each nail head then lite them up. Watching the flames dancing as the wax melted and flowed down the nails till reaching the sensitive skin of the scrotum, a huge smile crossed My lips and giggles escaped as he squealed from the hot wax.
Yes, I am feeling generous so you will find the video below on the Medical video gallery under, Flaming Hammer.

Can He? Vaginal Penetration...sub jason. 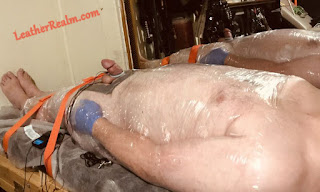 Not long after I banded sub jason then injected My balls between his thighs with Everclear back in December 2019, the big question became whether or not he could actually have traditional sex. My intention was to leave a lasting reminder, leaving My mark deep within My balls between his legs not render them useless. Even after numerous testosterone tests, the question remained. Could he remain hard enough to slide his cock deep into an eager vagina without any form of erectile medication? If he could, could he maintain it longer than a couple of minutes? The results from the t-tests continue to remain in the low range but he has been able to achieve an erection for a short time with physical stimulation. Considering all of this, there was a chance even though slim that he could but there was only one way to find out.
Recently an opportunity came to sub jason to test if he could in fact have traditional sex with his last sexual partner. The last time that he had felt a warm wet pussy wrapped around his fully functioning cock had been over 2 years prior to December 2019. Understandably, he was nervous to experiment because no male wants to fail especially with a previous partner. She had enjoyed his throbbing, rock hard member deep within her, but what would happen this time? If he did fail, would she question him or totally shame him for his failure? Perhaps he would once again feel her warmth engulf his cock as her wet pussy had before. Knowing My desire to have this question answered and his curiosity, he went to visit her for a few days.
Three days before I met with him, he sent Me a text but I instructed him to not tell Me anything till My balls between his thighs was back where they belonged, in My hands. The anticipation was high and I counted the hours till I would have My answer. With giggles and a smile that I just couldn't stop, I welcomed him in and chatted a bit before I wrapped him in pallet wrap and placed a hood over his head. To make sure he was securely restrained, I used the medical straps to secure his wrapped body to the cage table. Just how I prefer him, he wasn't going anywhere till I decided to release him.
The answer to My question, was he able to achieve an erection long enough to have vaginal sex? After bringing her to orgasm multiple times with finger stimulation, he was able to achieve an erection but blame it on position or timing, he was unable to maintain an erection long enough to penetrate her.
As you can see from the picture above, with a cock ring and electro along with physical stimulation he was able to achieve and maintain an erection for a short time though not a full erection. 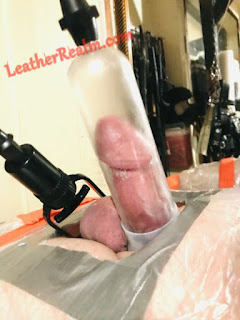 Above you can see that he has a fuller erection with the help from a cock ring as well as a penis pump. If he was able to maintain this erection, he could actually penetrate. Of course at this point, it's unlikely.
To look back at sub jason's journey so far, search My blog for "sub jason" or "Everclear" beginning at the end of December 2019. The blog entries also has pictures of his journey. The videos are below on My Medical video gallery.