This week I had my third banding session with Mistress Patty, and it was as powerful an experience as the first two.

Once Mistress Patty had checked that I had everything necessary to hand, she got straight to business and had me put the first band on.  I am getting more used to this now, and it seemed to go on smoothly, although it was harder work pulling my testicles through the band because my scrotum was much tighter than normal.  Once on, I felt the usual stab of pain in the spermatic cord, followed by a dull ache in my testicles. There was also some sharp pinching in the skin under the band, which I couldn’t do anything about because there is no give in the band at all once it is on.

Very shortly after this, Mistress Patty had me put the second band on. Last time I banded, I got some small blisters of skin trapped between the two bands, which took some time to heal. I was keen to avoid that this time, so made sure that I overlapped the second band very slightly on the first.  The pain increased, and I was soon needing to put ice under my scrotum to try to ease it.

Next, Mistress Patty told me to fit the three penis bands.  I have used these regularly over the past few months except for two periods (illness and Christmas), and they really work in preventing any erections, including morning or night-time erections.  I have found them to be invaluable in helping me confirm that I am on the right path. I want to be testosterone free, and thus erection and orgasm free, which is why I want to be castrated. Going weeks at a time without an erection or desire to ejaculate has been wonderful and makes totally sure I am doing the right thing.

Mistress Patty then did what she does so well - she asked questions and encouraged me, helping me to work through the pain and discomfort.  I needed to use the ice a lot.  I think, because my scrotum was tight when I fitted the bands, I had placed them very close to my testicles, putting pressure on them and causing more pain.  After a while the nausea began - which it did on the previous occasions too. Bile flowed into my mouth, and I felt as if I might vomit.  But I didn’t, and the feeling passed, and I was able to continue a short while longer.

Then it was time to remove the bands. I found this much easier this time. I have experimented with different tools - nail clippers, nail scissors and this time some small tin snips which worked perfectly!  No nicks or cuts, and very few attempts needed to cut through the bands. The excruciating (but momentary) pain when the bands come off is something you can never prepare for and is impossible to describe!  Mistress Patty told me that I had gone longer with this banding than the previous sessions. 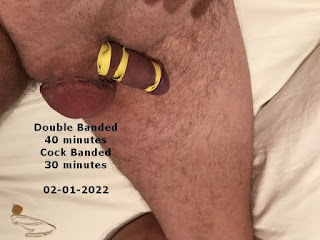 Afterwards comes a fantastic feeling of euphoria. Some of this may well be hormonal as life returns to the genitals. Some of it is probably relief that the pain and discomfort has stopped. But a large part, for me, is because I know I have just taken another step closer to my goal.  One day I will be castrated by Mistress Patty, and with each banding I feel more certain that that is what needs to happen, and I know that I am getting nearer to it.

Posted by Cruel Mistress at 9:54 PM