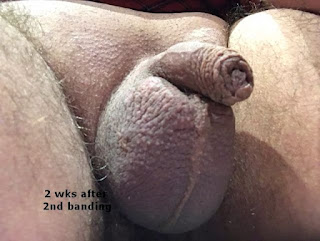 Immediately after my second banding, my right testicle was smaller and harder than normal.  I wondered if this indicated permanent damage, and I won’t lie - part of me wished it was. However, about 30 hours after the banding it had returned to a normal size and consistency.

What hasn’t changed though is the tightening of my scrotum - almost all the time it’s much more constricted than normal.  Once or twice I’ve noticed it hanging low, but the norm seems to be a very tight package.

The one problem I’ve had since the second banding is the damage it caused to my scrotum. At the time I assumed the bleeding was due to nicks caused when I cut the band off.  But I now realize what happened.  The two bands were very close to each other, but caught enough skin between them to cause little blisters, which subsequently became sore wounds.  I know now to make sure the second band either overlaps or is so close to the first that no skin damage has been done.  Today is the first day (at +12 days) that I don’t have visible raw wounds.

I have maintained the penis banding. I actually do it every 2 or 3 days because I am so happy with the results.  I haven’t had an erection (not even a morning erection) for weeks now, and I love it!  My penis size has greatly reduced, in fact it seems to be shrinking to nothing - which is another thing I’m very happy about.  I took the attached photo today - 12 days after my last banding.

Posted by Cruel Mistress at 3:47 PM