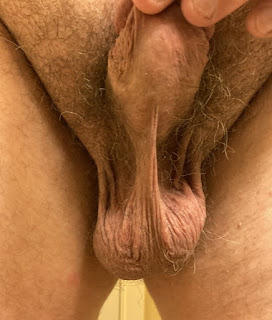 After I restrained sub jason with his legs up in the stirrups with My balls between his thighs totally exposed and his wrists restrained to each side of the bed, I began to examine his groin. The journey that he continues on started December 26th, 2019, with banding the balls between his thighs for an hour and 30 minutes in, injecting each testicle with Everclear. With the banding involved, the Everclear was forced to remain in the testicles for an extended period of time resulting in more damage. Our time began with an update to share. Yes, the update video is down on My video gallery. Now it was time to have a bit of fun with those bits between his thighs as well as that almost useless piece of flesh he calls, "mr. penis." The colorful, long candles that he had sent to Me was simply too lovely to ignore so I lubed up the end of one of the purple candles and forced it down into his pisshole. A piece of white cotton rope was tied just under the cock head to keep it erect since "mr penis" can't be depended on anymore then lit the wick. <wicked giggles> 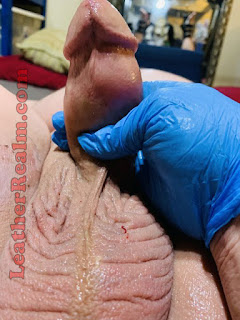 As I looked down upon sub jason's pathetic and almost useless cock, I had a wickedly lovely idea. I knew how to give that limp piece of flesh some girth. With that in mind, I gathered some infusion supplies and began to inject saline into various spots of his foreskin. While I injected saline, expanding the flesh, he squealed from the pressure stretching his sensitive skin. After the saline had been injected, I used a cock pump to force the saline to spread out more evenly which resulted in his limp prick appearing a bit thicker <wicked grin>

Yes, I have video to share down on My video gallery so go take a peek.

Posted by Cruel Mistress at 4:00 PM