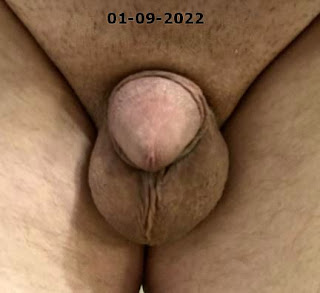 In sub jason's own words...

MsPatty's judgement day visit began like it has each of the last two years.  After a mid-late afternoon arrival, and a few preparations, i am shackled to Her gallows for several hours.  i am left alone to rest and think about the evening ahead.  It will be a long night.

Over the past two years, i have noticed It is easy to detach and write clinical words, but eventually the reality of these words sets in.  i was initially hopeful of an eventual (if extended) recovery, then began accepting some lost capacity, but neither really happened.  An hour's effort on MsPatty's part, back on December 26, 2019, resulted in my current sexually dysfunctional state.  i have been increasingly aware the past few months of how much permanent damage has transpired, and that what i am no longer able to participate in.  It is also obvious that not much more effort by MsPatty would be needed to take away my remaining sexual function.

MsPatty has been very vague these past few months about what may happen tonight - other than posting the options from past examples.  i will unknowingly experience each of Her examples this evening as the videos shows...

First - The Burdizzo - it is easily the most painful.  She has had me experience it more than once before.  There are three points of pain, not just one or two.  One is the hard pressure on the cords, but it is felt deep in the abdomen.  The other is the skin pinching - of both sides (top and bottom) - of the scrotum skin.  There is no escaping this sharp pain while restrained.  MsPatty teases me with the firm pressure of Her tool on each side but doesn't fully clamp.  i am shaking by the end from just Her half-effort.  i think there was enough pressure applied long enough to affect at least one of the cords for the short term.

Second - The Tri-Bander - Her band easily goes on extra high and begins its suffocating grip.  For me, it is probably the easiest fantasy castration method to succumb to, and MsPatty knows it.  What becomes obvious after 10-15 minutes, though, is that the 3+ month chastity - leading up to the events two years ago - had me on an edge which deferred the growing pain.  This time, after the earlier Burdizzo activity, with only 5-weeks lead up chastity (and much lower hormone levels now), i feel the deep pinching more quickly.  Deciding against banding at just past 20 minutes, MsPatty cuts the band off (painfully).  i am now pretty sure that more damage has been done on top of the previous.  i have no idea how i lasted a full hour back two years ago, or even the ~30 minutes on each of the prior first or second times banded.

Finally, MsPatty pulls out Her medical trays while i am still trying to process the effects of the previous two activities.  She teases the video viewers (and me) with delivering Everclear injections to further damage Her testicles between my thighs, followed by what felt like a surgical incision attempt to (logically next) extract and sever Her testicles from the cords.   Backing off from each, She decides instead on the game of letting me struggle to achieve erections and pursue my last? opportunities for penetrative sex.  Of course, this is now further controlled by Her; with only two erection-enabling pills offered to me.  This also assumes i can find a willing partner/opportunity in this continuing pandemic.  It is also yet to be determined if any of the activities earlier this evening have set back my otherwise slow recovery toward the bottom edge of normal testosterone production.

What occurs next, off camera, has me mostly numb, even more than a week later.  i cannot be certain what transpires, as i cannot see, but MsPatty had allowed me to smell the Everclear contents in Her needle - with a short squirt near my nose.  Soon after, Her left testicle is pierced by the needle, and the fluid contents quickly fills it up, with pressure and burning sensations.  i know it is the more damaged organ from the injections two years ago.  If it was the Everclear i smelled, organ function probably won't continue.  i was not paying as close attention to Her activities after this.  i think She may have injected some into Her right testicle, or may She just inserted the needle for effect, or maybe nothing happened to it.  i was still trying to process the moment just prior.

Some time will pass, and i will eventually be permitted to achieve a release (hardness elusive w/o blue pill).  What had been built up in the past ~5 weeks of chastity is then spent after great struggle, which further amuses MsPatty.  i am thinking She is envisioning what a future? sexual partner might experience, if i get the chance.

For the last week after the visit, both testicles have been larger and swollen for several days but have somewhat lessened over this time.  The left will still fluctuate in hardness and size.  The urge to release again strikes at 3, 5, and 7 days. The output contents are primarily clearer liquid, containing less milky-white, although there is some, but each is only one small pulse followed by some dribble - not encouraging.  One of the signs of sexual failure implied by a past questionnaire is the urge to release more often while one still can.  Getting hard at all has also been more stressful each time, possibly a further symptom.  i know it could be the earlier Burdizzo and band effects still in play, combined with my damaged state.  It could also be what MsPatty introduced off-camera.  MsPatty, of course, also gave me those two blue pills to 'try again' over the next few months, implying that i might be just fine after a week or two... or to just find out that even the pills won't work for me the next time...