When sissy michelle crossed My doorstep, I knew long before what I would be doing to amuse Myself and to push her further towards our goal. 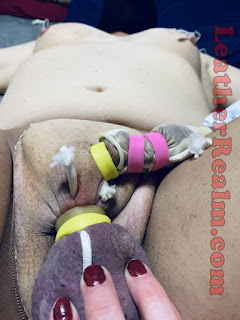 After pumping her natural breasts and catharizing her sissy clit, I set up the two 250ml bags of saline with IV tubing and inserted the winged needles into each breast, a couple of inches above each nipple and allowed the saline to begin flowing into each breast. All the while, I used the wide bands that sub jason sent to Me to place 3 of them at specific points down the shaft of her sissy clit to maintain the damage to it, rendering it useless.

Finally, as the saline flowed, I used My Tri-bander to place a castration ring just above the testicles then added an additional wide ring, one of those that sub jason had sent to Me.  Such a lovely shade of purple the balls appeared as they were slowly dying. At 40 minutes after them being banded, I decided to remove the castration ring since I have different plans for them when I do decide to castrate her. 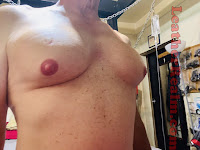 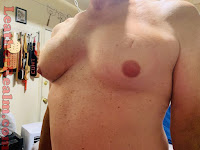 After both bags of saline had emptied into her, creating a full set of D-cup breasts, she placed them into a lacy black bra and was instructed to dress. Soon she was dismissed, allowed to leave for home.

Since Saturday, she has been sending updates. The latest, her sissy clit has continued to be totally useless, and she has experienced no libido since then. The update has put a huge smile on My lips. I'm utterly thrilled to hear that she is progressing nicely.

In the next 48 hours, keep an eye out on My video gallery below to see what I mean. Videos will be posted.