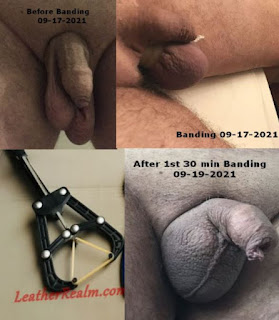 A New Beginning: In sub boy r's own words...

The past 48 hours have been some of the most rewarding and fulfilling in my life. Because on Friday evening I was banded for the first time.

My first meeting with Mistress Patty was a few weeks ago. She patiently and thoroughly explored my dreams and desires. In short, I want to live life as a castrated male, with no more testosterone or libido. Mistress Patty encouraging me to say these things out loud, and being honest with her and with myself, was a major step forwards for me. She told me to buy a tri-bander, and we booked our meeting for Friday evening.

On Friday I was excited but also quite nervous. Mistress Patty soon put me at my ease and with great kindness, care and patience talked me through exactly what she wanted me to do. The first band was hard to get on. It was fiddly getting both testicles through the band, and when I started to loosen the tension to ease the band off the three prongs, it slipped off one of them before I was ready and the band smacked into my testicle with great force – which was highly painful! The second prong released easily, and the third which much more effort but suddenly I realized that the band was on! There was a wave of pressure which was more of an ache than a pain, which soon subsided. My heart raced for a while, but it was mainly out of excitement. For the first time in my life I had been banded and taken the first step towards the new me!

Mistress Patty was very encouraging during this time, asking lots of questions which I suspect was to distract me a bit from any pain and discomfort. I was just wondering how long I was to keep the band on (I had assumed the first time would only be a few minutes) when Mistress Patty told me to load another one on the tri-bander. I was momentarily stunned. Should I do it? Then I thought, of course I should. By now I had complete trust in Mistress Patty and I wanted to show her I was serious about this. So a second band went on next to the first. It actually went on much easier – it was slightly harder pulling the testicles through because they were quite a bit tighter due to the first band, but it seemed easier getting it off the prongs. Now this felt real. Now I knew that serious damage was starting to be done to the spermatic cords. And totally at peace with it and happy!

Fairly soon I started to feel nauseous, to the point of bile flooding into my mouth. Mistress Patty explained that this was because the cords were being damaged, and advised me to apply ice under the scrotum. This helped but soon I began to feel shaky and Mistress Patty let me cut the bands off. This itself is an intensely painful experience – when the rubber finally gives way after much careful cutting, they release with a snap that sends immense pain through your body and makes you cry out.

The bands had caused some irritation and minor bleeding, and left deep marks on the skin. The first thing I noticed was that my scrotum and testicles were completely numb. And I felt great – a wave of euphoria came over me and kept me on a crest of excitement for a couple of hours, at which point the adrenalin stopped and I fell fast asleep, sleeping better than I have for ages.

The next morning, I awoke with a semi-erection, but some exploratory fiddling showed me that there was no way anything was going to happen. And I didn’t want it to. My scrotum was still numb and the skin still sore, but I felt completely at peace. Mistress Patty has said that she will help me take care of such soft erections, and I really look forward to that. Throughout Saturday I was tired, but happy. Today some (but not all) of the feeling has returned, and I still feel great! One difference today is that my scrotum is much tighter than it normally is.

This was the first step on my castration journey, a journey that we have agreed will end in Mistress Patty’s hands with her burdizzo. Before then I hope to enjoy more banding experiences under Mistress Patty’s instruction. Hers is now the guiding hand and voice in this, the most important part of my life.