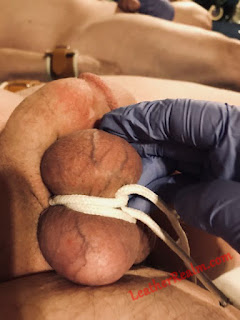 You see, or think about, someone which has piqued your interest, and you feel sexually attracted to them. Maybe you have had great sex with them already or your imagination has nicely filled in those blanks. Your (male) body reacts by causing your penis to engorge inside your underwear, getting uncomfortably hard...or it used to. Despite the mental triggers going off, it remains soft/retracted, in it's little bulbish-pod between your thighs.  Eleven months ago, MsPatty modified Her testicles between my thighs. i have since been deprived of healthy testosterone levels, and the natural, spontaneous, mentally-driven erections they produced.  My libido has returned just enough to remember what is supposed to be happening down there, but things frustratingly don't respond quite as they should.

Another T- test will be taken near the end of November, and the results are expected in soon after.  Although i edge closer each time to the 'normal' range, i believe the healing process has started to slow down.  The free/full testosterone graphs over this journey are showing a diminishing rate of recovery as more time passes.  MsPatty believes i would eventually cross the line into normal again, yet i am not sure when that will happen, or how far into normal will be achieved. To quote MsPatty from the July update, "they will never be the same as they were before...".  They certainly feel and look smaller than they were just one year ago...

My last update alluded to a possible encounter with a past lady friend.  World events have again kept us at significant distance. At the same time, despite my initial use of the booster supplements this month, and a heightened mental libido edge from them, rising and maintaining an erection without physical stimulation remains elusive.  The last time i had sex with any woman was with this lady friend, now over 3 years ago.  It can only be speculated on at this point, but it now seems unlikely i could have participated in sexual activity had the opportunity arisen.  Confidence in my ability to engage in coitus with any woman remains elusive at this point.

In one month, at the one year anniversary of this journey, i will return to MsPatty for another update exam and further T-tests will be taken.